Using Polar Tracking instead of Ortho Mode in AutoCAD

Ortho is demanding and inflexible. Polar is helpful and accommodating.

In AutoCAD, the goal is to draw as quickly as possible and as accurately as possible. To increase your accuracy, and to boost your speed, AutoCAD includes two drafting aids that constrain your cursor (ORTHO) or interpret your cursor movements (POLAR) to draw lines at predefined angles even if the hand controlling the mouse isn't quite moving in that direction.

As you may have guessed from the title, the point of this article is not to explain the differences between ORTHO and POLAR, or offer tips on their use. I intend to take sides! One of these tools is superior to the other in all but a very few situations, but because the other one came first inertia makes it the tool of choice for most.

Now before anyone misunderstands, I am not advocating that everyone should undefine the ORTHO command in AutoCAD and use only POLAR going forward. If you are involved in P&ID or electrical schematics, for instance, where angles other than 0, 90, 180, or 270 are frowned upon, then you should stick with the king of right angles – ORTHO. Pretty much everyone else please keep reading.

There are three main problems with ORTHO that POLAR solves: flexibility, relativity and availability. These issues may seem small or just picky, but they are so frequently encountered that even small efficiencies add up quickly to become a big time savings.

Almost every project will occasionally need objects drawn, copied or moved in the four directions ORTHO offers, but most projects also incorporate a few other angles that reoccur frequently as part of the design theme. ORTHO will not help with these other angles unless you rotate your UCS. Yech! This is only trading one problem for another so most people don't bother. They just key in the angle manually over and over again, wasting a few seconds every time.

On the other hand, POLAR lets you simply add these other angles (see the graphic below). No UCS rotation required. No repetitive command line entry necessary. No wasting a few seconds multiple times a day. Depending on the size of the project, this can turn into a significant amount of time. Measuring across projects this definitely turns into a significant amount of time.

Sometimes what you really need is to draw or rotate an object aligned with or perpendicular to an existing line. POLAR has a setting that will allow you to measure your angles "relative" to the last segment drawn or the object you OSNAP to. ORTHO cannot do this. 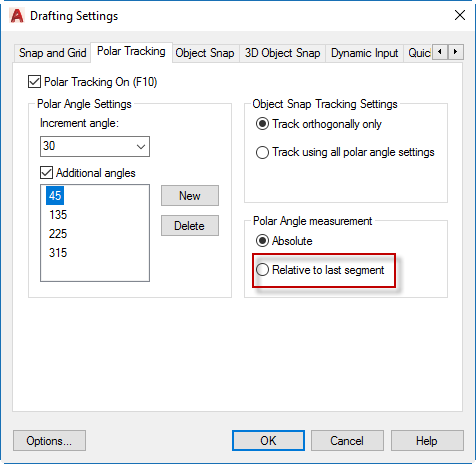 Unless the project requires all orthogonal angles, such as P&ID or schematics that I mentioned earlier, there will also be a large number of one-off angles that need to be drawn. If you are an ORTHO user you will have to toggle ORTHO off when these other angles need to be drawn and then toggle it back on again when you need to draw due North, South, East, or West because those are the only angles it "allows". You can actually tell who the heavy ORTHO users are in your office by taking a look at your coworkers’ keyboards. If the F8 key in their function key row has no "F" or "8" on it, then they are an ORTHO user. They have toggled it on and off so many times the text has been worn off the key.

Rather than forcing the cursor to draw a certain set of angles, POLAR "facilitates" the drawing of angles you have set in its properties. Only when the cursor approximates a POLAR angle does the tracking vector appear and the object being drawn or modified is constrained to that angle. If you want or need to draw a one-off angle there is no need to toggle POLAR off to do so. On rare occasions POLAR may interfere with your ability to draw angles close to but not at the angles set in properties. Only then does it need to be toggled off with the F10 key. This is so rare, in fact, that I had to check with AutoCAD which function key it was so I could complete the previous sentence!

POLAR does not have a steep learning curve. The main challenge is remembering to set the proper angles BEFORE you start drawing. People who look at your drawings later will not be able to tell that you used POLAR instead of ORTHO. Give it a try.

If you have any questions, don't hesitate to contact us (281) 445-6161. For information on our AutoCAD training courses, visit our training page.